You have no items to compare.

You have no items in your shopping cart.

Product was successfully added to your shopping cart.

Our Mainstream PC meets or exceeds all of the recommended system requires for X-Plane 11. This system is purposely designed to be the least expensive system allowing for triple or quad display flight simming on three or four 1080P displays. Those could be 24" 1080P monitors, 70-inch 1080P TVs, or anything in between. Please watch the video at the bottom for a demonstration (coming soon). It is compatible with X-Plane, FSX, and Prepar3d. We prefer X-Plane!

Mass storage is typically the bottleneck in just about every system. So, how do we reduce this bottleneck? We do this by providing an SSD now as standard equipment. That means Windows will load in seconds, not minutes. Anything that is disk-intensive will be much faster as SSDs are so much faster than regular hard drives. Also, SSDs rarely fail. So, your data is safer on an SSD.

Supports one, two, three, or four displays. With four, you can have wide forward view with three of the monitors, and use the fourth for your instruments. We have instructional videos on how to do all of this. Just let us know when you order and we'll send you the how-to videos.

How is this system better than a typical "budget" gaming system?
1. Uses the enthusiast-class Intel Z-Series motherboard chipset (instead of H or B series)
2. Supports up to 64GB instead of 32GB of memory
3. Has four memory slots instead of two
4. Dual-Channel Memory instead of single channel for more bandwidth
5. DDR4-3000 RAM versus DDR4-2133 or DDR4-2400 found in most budget systems
6. Supports all 8th-gen and 9th-gen Intel processors up to the i9-9900K
7. Supports overclocking
8. Has a 700 Watt Power supply to support all of the currently-available video cards as well as future cards
9. Bandwidth - 24 PCI-Express 3.0 Lanes compared to 6 on most budget systems.
10. M.2 SSD slots for less cable clutter and faster SDD speeds
11. Comes with a large single SSD instead of a small SSD and a mechanical hard drive

Our Mainstream system meets or exceeds all of the recommended system requirements for X-Plane 11, which is our recommended flight simulation software. It also does a great job at running Prepar3D and FSX!

Use spaces to separate tags. Use single quotes (') for phrases.

Write Your Own Review

Only registered users can write reviews. Please, log in or register

x
Price:
Actual Price:
Our price is lower than the manufacturer's "minimum advertised price." As a result, we cannot show you the price in catalog or the product page.

You have no obligation to purchase the product once you know the price. You can simply remove the item from your cart.

Our price is lower than the manufacturer's "minimum advertised price." As a result, we cannot show you the price in catalog or the product page.

You have no obligation to purchase the product once you know the price. You can simply remove the item from your cart. 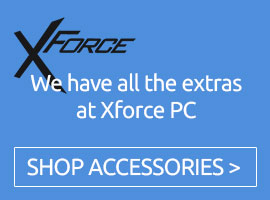